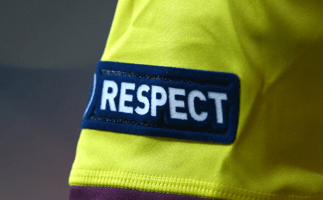 An important message to the Kings community about Respect

To all members of the Kings Langley SFC community

After incidents at Lynwood Park in recent weeks from both visiting and home teams, the Committee sadly is compelled remind all coaches, managers, players, spectators, parents and caregivers about Kings Langley SFC's expectations for how our community interacts with match officials.

All referees  - official "black and white" refs, MiniRoo Game Leaders and volunteers appointed by the home club to fill a vacancy - are there to uphold the Laws of the Game. Whether or not you agree with their interpretation is irrelevant. The Club expects ALL members to respect and accept their decisions. Any concerns about an official must be raised by a coach or manager through the proper channels such as the weekly Coach and Manager match day report form. We thank and appreciate those coaches and managers that have been using these channels.

UNDER NO CIRCUMSTANCES should anyone approach an official during a game, at half time, at full time, after the game or back at the clubhouse to argue about any of the decisions made during the game. A referee does not owe anyone an explanation. A referee does not have to justify their choices. The referee's decision is final. End of story.

The BDSFA and the Referee's Branch have had considerable difficulty on a weekly basis this season finding enough officials to appoint to competition matches. At the club level, many clubs have also struggled to find enough Game Leaders to oversee MiniRoo games. Based on what Committee members have seen across all grounds this year, this is not surprising. We have all witnessed parents swearing from the sidelines, coaches and mangers arguing with referees at half time or full time, and spectators following officials and Game Leaders to clubhouses after the game to continue to try and argue with the official.

Many referees and assistant referees appointed to our junior competition games are teenagers, as are all of our own Game Leaders. The Committee is extremely disappointed that adults with decades of experience in and around the game still think it is appropriate to argue with children and young adults about their decisions. In the Committee's experience, those who argue the most are almost always relying on outdated knowledge that has not kept pace with changes to the Laws of the Game. Unless you have passed a Level 4 Referee course or Game Leader course in the last three years, your knowledge and understanding of the game requires verification and validation before you are in any position to approach a match official for a conversation about their decisions.

It is vital that our community understands that where the Referee's Branch is unable to find a referee to appoint to a competition match, the responsibility falls upon the home team to find a referee. If a referee cannot be found by the home club Committee, the home team is forced to forfeit the match. The shortage of referees can be directly tied to the levels of abuse hurled at officials each weekend by players, coaches, and spectators.

Repeat offenders at Kings Langley that complain about referee performance will find themselves first to be tapped on the shoulder to referee the next time there are games with no appointed officials.

If you think you can do a better job, then put your whistle where your mouth is.

PlayFootball - The Laws of the Game - free online training module

Sign up to our newsletter for regular news and updates.